L’Arche Winnipeg announced the creation of the fund, which is named after long-term advocate Jim Lapp

L’Arche Winnipeg announced the creation of the fund, which is named after long-term advocate Jim Lapp 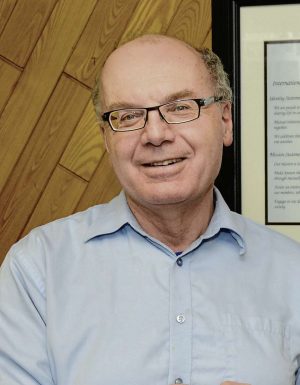 On Dec. 8, L’Arche Winnipeg announced the creation of the fund, which is named after long-term advocate Jim Lapp.

"I’m grateful and humbled by such an honour," Lapp said. "I truly believe that we can create a more inclusive society for persons with intellectual disabilities when we work together."

Dozens of people joined the Zoom broadcast to honour Lapp, who recently retired after working for the rights of people with intellectual disabilities for over 47 years. For the past 12 years, Lapp has been L’Arche’s executive director.

"I’m kind of speechless," Lapp said following the presentations, which included many videos and messages from well-wishers and those thanking him for his years of service. "L’Arche Winnipeg has been really important to me."

Founded in 1973, L’Arche Winnipeg is a not-for-profit, community-based organization providing homes and social opportunities for people with intellectual disabilities. Among its programs, the organization operates L’Arche Tova Cafe in downtown Transcona, which provides employment opportunities for their members. L’Arche itself was founded in France in 1964.

Lapp began started with L’Arche Winnipeg as an assistant in the organization’s first home in Transcona in 1974, eventually moving on to a career in teaching. But he remained volunteer supporter and board president of L’Arche Winnipeg, before spending the last 12 years as executive director.

Lapp was also joined by Tova and Larry Vickar of Vickar Automotive to launch the endowment fund.

"Jim is a capable, dedicated, unassuming and hard-working individual who has been a friend and advocate for people with developmental disability since the seventies," Larry Vickar, a long-term supporter of L’Arche who is matching donations to the new fund up to a total of $50,000, said.

"Naturally, in his retirement, Jim wants to continue his friendship with members of L’Arche," Vickar added. "Jim, may you enjoy a happy, healthy, and productive retirement ... knowing you have made a world of difference for so many."

To kick things off, Tova and Larry Vickar made a $25,000 contribution to the fund, which is hosted by the Winnipeg Foundation, which will also contribute based on their gift matching rates.

"It’s a tremendous honour," Lapp said. "I’m very touched by it. Thank you to everyone, and thank you for your love."

Dividends from the fund will "allow L’Arche Winnipeg to create projects focused on equal opportunities and social inclusion for people with intellectual disabilities, aiming to end social isolation."